Written by Plant With Purpose on February 18, 2010 in General

Plant With Purpose Technical Director Bob Morikawa, who has been in Haiti for the past month working with our local staff to coordinate immediate relief efforts, has safely returned to his home in Canada. The following are some blog posts from his last days in Haiti. Thanks, Bob, for all your hard work!

I think in some previous post, I’ve mentioned that the migration to rural zones is causing a huge increase in household size. We’ve conducted two surveys 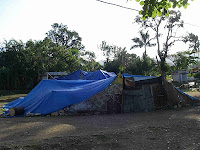 of the family situation, one around the end of January, and one last week. At the end of January, the average family size was around 8 members an increase from the pre-earthquake average of around 6 members. As of last week average family size was 10 members per household, with many families having 15 or 20. I heard of one family in a small town called Trouin with 32 people living under one roof. The situation is, as they say, dynamic, and complicated. We are doing our best to track the trends while at the same time trying to get help to these same families as best we can. Pictured here is a small ‘settlement’ in Trouin where everyone is crowded under plastic tarps. The last time I visited this camp 3 weeks ago, it was much more adhoc. Now it looks like people are settling in for the long haul.

I’ve got to say, I’m proud to be part of this team here of our staff that are responding to this situation. At least I am at the moment—other moments I feel paralyzed with frustration, so I may as well post now.

One of our staff just came down from the border area on motorcycle with a handful of household surveys. These 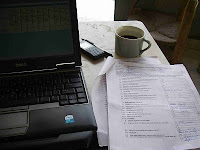 surveys are very short, one page only, and only a handful of households were interviewed, 25 in the case of the border. But all this still takes time, and if you knew the road conditions and the separation of the communities in that area, you would know that even this small amount is no mean feat.

On top of that this technician had tire puncture on the way, and managed to get the bike here on partial pressure. On top of that, this same technician has the responsibility to price out and buy seed stock for our upcoming emergency seed distribution, so he really had zero time in which to conduct these surveys. So now I have data to enter. Much needed data which can help us make decisions about what to do and how to do it.

I’m going to go out on a limb here and state outright that this is the biggest humanitarian crisis since Rwanda. The number of fatalities is not quite as high, somewhere in the range of 200000, but the number injured or displaced is in the millions. The official number affected is around 3 million, but if you count the fact that all those displaced people are crowding back into the rural homes of their parents, relatives, or friends, I would hazard to say that there is hardly a family in the country that is not affected. Not to mention the uncounted that are fleeing to the Dominican Republic, the US, Canada, and other places. I would go even further to say that if you are reading this blog post, this event has also impacted you in some way. It is really amazing, the way the global community has responded to this event, giving financially, volunteering, sending materials, planes, relief experts, etc. I have even noticed that Google has now added Haitian Creole to their list of languages on their Translate tool. No doubt this is also a response to the earthquake.

That is one (of several things) that contrasts this event from Rwanda. Maybe we all trying to make up for our lack of response to Rwanda. I think Bill Clinton has admitted as much with respect to his own record. I don’t think this is a chance to make up for past sins. Acting out of guilt usually goes no where good in my experience, but this may be a chance to learn from past mistacks, mistakes.

You can read all of Bob’s blog posts at whereisbob.blogspot.com.