Everyone Has Something to Offer

Written by Plant With Purpose on March 16, 2010 in General 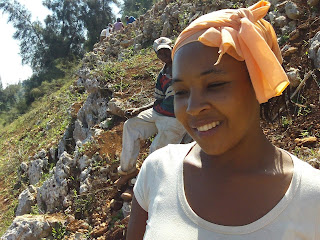 News from Haiti has been steadily decreasing as worldwide attention turns to new disasters, dilemmas, and political agendas. But my attention is held captive by the stories of hope, resilience, and rebuilding that we continue to receive from our Haitian staff.

Thus far, 30 teams and 600 workers have participated in our Short-term Employment and Soil Conservation project. Together, these teams have constructed more than 56,827 meters—35 miles!—of soil conservation barriers. This project is benefiting rural farmers by providing them with much needed cash, as well as protecting and restoring their greatest asset—their land.

In Fonds Verrettes, an area where we work near the Dominican border, seven work teams are helping to reforest and protect a microwatershed that covers 27 acres. Each group is composed of about 21 people, including Plant With Purpose members, community residents, and internally displaced people (IDPs) who have migrated from the cities back to the rural areas since the quake. Since March 2nd, these teams have constructed 8 miles of soil conservation barriers. 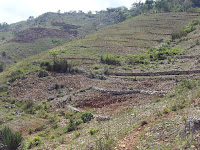 The benefits of the project are twofold: the barriers conserve soil and protect farmers’ crops and homes from devastating mudslides that could ensue during the coming rainy season (notice how steep the hillsides are in this photo) and the employment opportunity gives desperate farmers a meaningful way to earn income and support their families.

Milmer Martinez, our Programs Officer, has been in Haiti the past couple of weeks overseeing the project and working alongside farmers as they plant trees and construct soil erosion barriers. Besides being jealous that Milmer gets to meet and speak firsthand with the workers who are a part of the project, I am also incredibly excited to share a few of the testimonies he has shared with us.

One story that inspired me is the story of Nelta Fils-Aime. Nelta (pictured above) returned to Fonds Verrettes with her five siblings after being displaced from Port-au-Prince by the earthquake. Wanting to contribute to household income and help to alleviate the new burden put on her father by her brothers and sisters, Nelta asked to join our Short-term Employment and Soil Conservation project. Grateful for the opportunity to make some money, Nelta worked industriously to construct soil erosion barriers. I was already impressed with Nelta’s resilience, community spirit, and willingness to work hard to support her family; I was blown away when I learned that she was accomplishing just as much as her fellow workers even though one of her hands is missing. 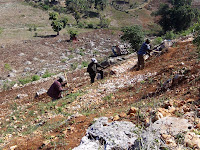 The whole community refers to Nelta as very courageous, and we are excited to see the ways our Short-term Employment and Soil Conservation project has allowed Nelta to not only be welcomed in to a new village, but also be given the opportunity to contribute to the health and future of the community in a meaningful way. For now Nelta plans to settle in Fonds Verrettes and, though unsure of the future, hopes to one day start a small business.

At Plant With Purpose we believe that everyone has something to offer. Nelta is just one illustration of the thousands of people who are being empowered by Plant With Purpose to overcome poverty, persevere through tragedy and adversity, and follow their dreams.

Stay tuned for more stories and testimonies from our relief efforts in Haiti.