Healing and Reconciliation in Burundi

Written by Plant With Purpose on April 8, 2010 in General 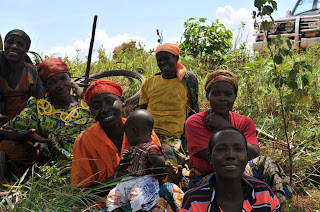 Burundi, Africa has a very troubled past and an uncertain future. Burundi is home to the Tutsi and Hutu tribes, who have occupied the land since the country’s formation over five centuries ago. Belgian occupation greatly increased ethnic conflict, and over 40 years of brutal civil war has left the country aching and the land depleted. It is estimated that over 300,000 people were killed in 1993, following the assassination of the then Hutu head of state. When peace was finally achieved in 2006, large numbers of refugees started returning to their homeland of Burundi from Tanzania.

The return of native Burundians to Burundi after a long absence has been an ongoing problem for Burundi. In an effort to make the difficult transition easier, “peace villages” were set up where people returning to Burundi could have a small home, a few goats, and a small amount of money. These villages were set up by the state-run organization PARESI (Project d’Appui au Rapatriement et la Rintigration des Sinistrs) as well as supported by the European Commission Humanitarian Aid department. Although these villages do offer hope to many Burundians, and have seen both Tutsis and Hutus begin to live side-by-side, there have still been many problems associated with the villages.

The purpose of the peace villages, set up in 2003, was to lead to healing and reconciliation among three ethnic groups, the Hutu, Tutsi, and Twa. Yet, as explained in the article, “ ‘Peace’ Villages Come With a Price” from Humanitarian News and Analysis, not all of the residents of the peace villages are receiving reparations. Recently, many of the returned Burundians have not received anything from the state-run organizations, and there has been difficulty accessing water since there is only one water tap for 1,600 people. Added to these conditions is the poor healthcare in the area which especially affects pregnant women who have to “travel long distances, through wetlands, to reach a health centre,” according to the article. Also, young children have had little access to healthcare, many of which suffer waterborne diseases.

Many Burundians have and continue to return to their native land, some of whom have never even been to Burundi yet have a family and cultural history invested there. Although the peace villages have good intentions, they are an example of a movement that is not working as perfectly as planned. The people of Burundi have a past full of suffering and are in great need of healing and reconciliation, as well as a future that entails more than just a small house in a land that has changed greatly since they were a part of the community there.

That’s where I’m proud to say Plant With Purpose comes in. Plant With Purpose trains farmers in peace and reconciliation and focuses on restored relationships between farmers and the land they depend on and amongst historically antagonistic ethnic groups. It is one thing to hand a refugee a plot of land, it is another thing entirely to teach that refugee how to work the land in environmentally sustainable ways that can empower and transform. Plant With Purpose does not just give out handouts; it works with individuals and communities to enrich many aspects of their lives, from income and agriculture, to reconciliation and healthcare. I’m proud to work with an organization that has a holistic approach to transformation and development, and most importantly, offers a new approach to hope for the people that need it the most.