Written by Plant With Purpose on August 3, 2010 in General

I realize that it’s not for everyone, but I think that it is a fascinating game. Most people I talk to say “I like going to baseball games, but watching it on TV is just too boring.”

Ok, it doesn’t have the flash and finesse of basketball, the brute strength and strategy of football, or the daily brawls of hockey. Yes, I realize that the players are standing around 99.9% of the time, chewing various things and scratching various body parts. True, it has been officially dropped from the Olympic Games, while sports like badminton, handball, and table tennis remain.

But baseball has numbers. Lots of them.

BA, SLG, WHIP, BABIP, ERA, OPS, OBP, and a host of other acronyms make up the mathematical heart of America’s pastime. The statistics range from simple, such as batting average (hits divided by at bats), to borderline ridiculous, like fielding independent pitching (FIP = (HR*13+(BB+HBP-IBB)*3-K*2)/IP, plus a league-specific factor around 3.2).

As offensive as this plethora of numbers is to many people, it really is incredible the knowledge that can be attained after an examination of the relevant numbers. Statistics, while at times arduous and confusing, serve as important indicators of what is going on, what will likely happen, and what actions need to be taken.

Burundi is no stranger to hardships. Since gaining independence in 1961, the nation has been plagued by ethnic tensions between the Hutu majority and Tutsi minority. It is just now seeing the rewards of a peace process following a 12-year civil war based on these tensions. Half of the population of Burundi lives below the poverty line, with an average annual income of $140, according to the World Bank.

While there has been considerable international effort to help Burundi rebuild their war-torn country and reestablish some sense of national unity, much remains to be accomplished. Standing in the way of these accomplishments is, among other things, the most corrupt government in East Africa. According to the East Africa Bribery Index, a citizen of Burundi is expected to pay a bribe nearly 4 times out of 10 visits to a public institution. How is a country to fix its obvious problems (poverty, illness, hunger), when under the surface is this poison of corruption, crippling the people who so desperately need to be healed? 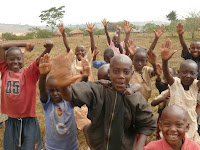 Plant With Purpose has seen incredible transformations take place in Burundi in the past year. The work that we do in rural communities empowers people to help themselves and to help their neighbors. The knowledge that we give to communities spreads throughout the country like yeast spreads through dough—to borrow an image from our Lord. We believe that through the healing of small communities, much greater transformation takes place. Plant With Purpose as a non-profit organization has a blanket policy of never paying bribes to accomplish our work, and we have been able to build relationships with local municipalities and leaders, which has allowed us to steer clear of payoffs and kickbacks.

The issue of government corruption in Burundi is indeed daunting, and the statistics are intimidating, but the power of loving, compassionate, and educated citizens shall overcome.