Written by Plant With Purpose on March 11, 2010 in General

I saw a headline this morning that caught my 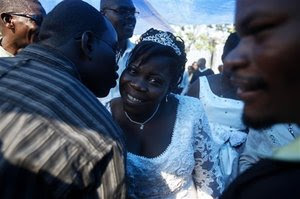 eye: Signs of life and love emerge in devastated Haiti. This positive message jumped out at me as a stark contrast to the sea of depressing headlines I have seen lately about Haiti’s deforestation problems, chronic poverty issues, abandoned orphans, and the daunting task of rebuilding their capitol.

As I read the article, I was startled to see that it described a wedding that took place in Port au Prince in February. A wedding! I know this sounds silly, but my eyes started to water as I read how the couple exchanged their vows under a blue tarp in front of the destroyed church where they were initially going to be married. The bride had sung in the choir there along with other friends who were victims of the January 12th earthquake and weren’t there to celebrate. People watched from dirty piles of rubble as guests sang hymns accompanied by a lone drummer. Their home is a pile of rubble, their church in ruins, and their honeymoon suite is a tent shared with eight relatives.

As a bride-to-be, (I’m getting married this Sunday!) the story of these people really humbled me. I am getting married in a nice church, with all my family there, and I am leaving for a tropical honeymoon afterward. With all the plans that have been made, I can’t even fathom one thing going wrong with my wedding, (and I swear I’m not a bride-zilla!) The stress of planning leading up to the wedding has consumed me, but this couple’s story, perhaps, is a reminder that it doesn’t matter where you are or what circumstances you are undergoing, love will emerge and can’t be destroyed.

The bride was quoted as saying, “We’re still here. No matter what the situation is, we are going to be together.” I think this shows the tremendous resilience of Haitians, and I am honored to be a part of an organization that is working to empower people to persevere.

Kate McElhinney serves as the Marketing Coordinator for Plant With Purpose. She plays an integral role in executing the company’s marketing campaigns and PR efforts. Kate also coordinates the annual gala and oversees the production of the company newsletter, The Sower.