Written by Plant With Purpose on March 4, 2010 in General 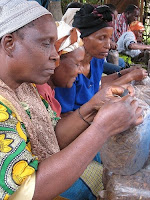 In honor of International Women’s Day (officially March 8, but there are events going on nationwide all month), we would like to share a post written by our wonderful new Grant Writing Intern, Stephanie Rudeen, on Plant With Purpose’s efforts to empower women and improve maternal health.

by Stephanie Rudeen
Pregnancy and childbirth kill more than 536,000 women a year, more than half of them in Africa, according to the World Health Organization. That is equal to ten Yankee Stadiums full of people or the entire population of Wyoming! I grew up in a household full of women, so it naturally startles and hurts me to find that so many women die each year from a lack of maternal health care.

Africa has some of the world’s highest death rates in pregnancy and childbirth. For each woman who dies, 20 others suffer from serious complications, according to the W.H.O. Tanzania, one of the countries Plant with Purpose works with in Africa, has roughly 13,000 maternal deaths annually. Although this isn’t the worst record in Africa, it is still a major area of concern. Maternal health is a complex issue and has many causes, from a lack of maternal healthcare to a lack of knowledge to even agricultural problems. I am new to Plant with Purpose, but it encourages me to see that this organization also lends a hand towards battling maternal mortality. 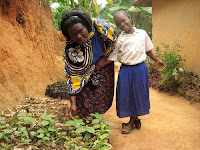 According to womensenews.org, developing countries also require water to combat the maternal death rate crisis. According to their article, “Water is Key to Reducing Maternal Mortality,” not having enough water can put stress on a woman physically as well as psychologically which leads to a greater chance of death during childbirth. It gives me hope to see that organizations like Plant with Purpose work to bring clean water to the rural poor, especially in countries such as Tanzania. Plant with Purpose works to bring access to more clean, safe water to women and children, as well as allowing access so women and children do not have to walk as long of distances to reach clean water.

Another step in reducing the maternal mortality rate is through the empowerment of women. Growing up surrounded by women was a constant reminder of how important women and mothers are to a community, and how important it is to make sure every woman has the chance to live a full and healthy life. A very important part of my life is my pride in being a woman, and I am happy to have begun working with an organization that also supports women’s empowerment, especially in rural communities. Plant with Purpose empowers women to start their own small businesses and offers women a network of support and business training. Although this may not be a direct step in the direction of lowering the maternal mortality rate, I believe every time a woman becomes more knowledgeable and empowered in her life, she also becomes healthier, and more self-aware and confident.

While the maternal mortality rate is a complex and multi-faceted issue that concerns me very deeply on a personal level, it brings me hope to work with an organization such as Plant with Purpose. Plant with Purpose is able to indirectly, as well as directly, help women become empowered and improve the health of women in Africa and countries such as Tanzania. Decreasing the maternal mortality rate cannot be accomplished overnight, but it is through continuous effort and hope that women’s lives in developing countries can be changed for the better. For me, every mother saved in any country in the world, is one community that has been improved for the better.