Written by Plant With Purpose on July 6, 2010 in General 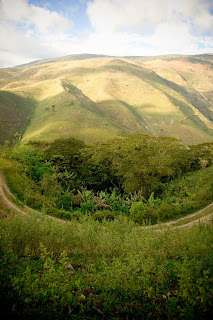 Haiti is the poorest country in the Western Hemisphere, everyone knows it because 90% of the time people mention Haiti’s plight they insert that fact somewhere in their commentary. Did you know that the island of Haiti once contributed to 25% of France’s wealth? It’s true…. Did you know that Haiti was the first slave nation to gain independence from an uprising against one of the world’s most powerful nations? Also, true… So what happened?
I have been preparing for my trip to the Dominican Republic for the last few weeks and in preparation I picked up a book called Collapse, by Jared Diamond. The book contrasts Haiti and the Dominican Republic’s beginnings as nations. Diamond’s book focuses on societies through history that either succeeded or failed, and why. I wanted to share a little bit of Dominican and Haitian history with you all (Keep in mind this is a brief summary and many details and events have been left out.)
Hispaniola, the island shared by Haiti and the Dominican Republic today, was originally inhabited by Taino Indians. In 1492 the famous Spaniard who sailed the ocean blue stumbled upon an incredible land which included gold, valuable timber, and fertile soils for sugarcane production—all of which could be mined and harvested for little or no cost to the Spanish just by conquering the indigenous Taino tribes. Tragically, the Taino’s population dramatically declined in the early years of Spanish rule because of Eurpean diseases and poor treatment, so much so that the Spanish began importing slave labor from Africa to mine and farm the island’s valuable resources. Spain set up colonies around the island that used indigenous labor and exported Hispaniola’s natural resources abroad.
Spain’s interests and the interests of its conquerors were moving on however. Columbus found riches beyond his wildest dreams as he conquered lands on the Americas’ mainland like Mexico, Peru, and Bolivia. In the 1700’s, as Spain’s attention was elsewhere, France began conquering the Spanish colonies on the western end of Hispaniola and started importing African slave labor to work the land, creating a major export center to the rest of the world (in 1795 France had 700,000 slaves compared to Spain’s 30,000 on the other side of the island). At one time, present day Haiti provided 25% of France’s incredible wealth.
In 1795 Spain ceded its less than valuable land and small scale economy to France and the entire island was under French rule for a short time. The slave populations on the island far exceeded the number of French who operated the colonies (by 91%) and in 1791 and 1801 slave rebellions broke out. France’s armies suffered heavy losses trying to maintain control and as Diamond explains, “In 1804, having sold its North American holdings to the United States in the Louisiana Purchase, France gave up and abandoned Hispaniola. Not suprisingly, French Hispaniola’s former slaves, who renamed their country Haiti (the original Taino Indian name for the island), killed many of Haiti’s whites, destroyed the plantations and infrastructure in order to make it impossible to rebuild the plantation slave system, and divided the plantations into small family farms.”
From then on, there was a whole political history that severely affected the downward spiral that Haiti has faced and the forward progress that the Dominican Republic has seen in the 19th and 20th centuries. Haiti’s foreign policy has been one of seclusion, removing itself from the global economy and focusing on subsistence farming, in addition to making it illegal for immigrants to own land. On the other hand, the Spanish reacquired control of the eastern end of the island shortly after Haiti’s independence was declared and they immediately began allowing foreign investment and focusing on rebuilding the Spanish side of Hispaniola as an export economy. The environmental policies adopted by each of the countries’ respective leaders also played a huge role in the direction that the landscapes took. (picture of Haiti DR Border) The Dominican 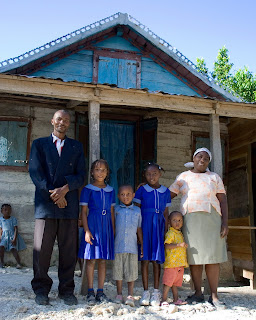 leaders started protecting forests from logging and slash and burn agriculture and eventually subsidized propane and natural gas to decrease the market for charcoal. Meanwhile, Haitians, with twice the population and half the amount of land as the Dominican Republic, continued deforesting the land as a way to provide for their families when subsistence farming was not enough.
‘One Island, Two Peoples, Two Histories’ makes for a most appropriate title for Diamond’s chapter on the island of Hispaniola, and I would highly recommend reading it if you are interested in learning more. I am so grateful to be working for an organization that is effectively addressing root causes of poverty in both
Haiti and the Dominican Republic, working with the land and its people towards transformation.