A Look at Fuel-Efficient Stoves

Written by Plant With Purpose on March 30, 2010 in General 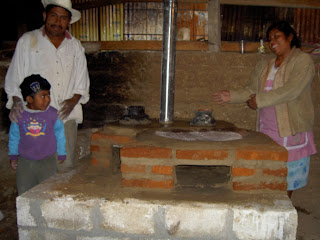 Every day it is becoming more and more apparent that human health and the health of the environment operate hand in hand, and this can be especially seen through the lives of the people of rural Mexico. Imagine a life where just cooking a meal for your family greatly decreases your health and increases your chances of attaining many illnesses and infections. And while your own health declines, you are also harming the environment and causing increased deforestation. This is just a typical day for many rural Mexicans; yet, Plant With Purpose brings hope through the realization that continual health and safety for the environment can bring about health and safety for individuals as well.

Recently, open cooking fires were very much the norm for rural Mexican families. Yet, the effects of cooking fires are twofold, not only does it hurt the environment through increased deforestation to supply the wood for the fires, but it also harms the health and safety of the people themselves because of the large amount of smoke inhaled. According to the article “Mexico: Ecological Smoke from Fuel Efficient Stoves” by Emilio Godoy, “acute respiratory infections are among the main causes of childhood morbidity and mortality in Mexico.” The majority of these acute respiratory infections are caused directly from the inhalation of smoke from open cooking fires. This places women and children especially at risk since it is often women who operate the fires and cook, and children since they spend much time around their mother and the cooking fires. According to this same article, “1.6 million people, especially women and children, die prematurely each year from exposure to high levels of indoor smoke from home cooking and heating practices.” This large amount of deaths just from the act of trying to cook a meal stresses how every day can be a struggle when people do not have the resources they need. 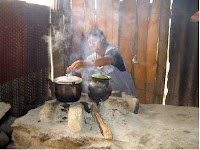 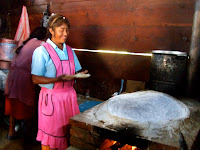 About a quarter of the population of Mexico is reliant on firewood for cooking and heating, which causes much of the deforestation in Mexico.

Mexico also has the second highest amount of deforestation in Latin America. The impact of deforestation on the environment and for individuals is huge; it contributes to global warming, affects the water cycle and water supply, can increase the risk of landslides, and can even result in a decline in biodiversity. It is evident that a daily necessity like cooking food is threatening individuals and the environment in complicated and not easily solvable ways. Yet, Plant With Purpose and other organizations that Godoy elucidates on in his article, are helping to change the quality of life for rural Mexicans, as well as helping to conserve and improve the environment.

Plant With Purpose works with farmers and families in Oaxaca, Mexico to construct many fuel-efficient stoves that have greatly improved the lives of individuals as well as the environment. These stoves use less than half the wood of traditional stoves and virtually eliminate the harmful smoke that causes death and serious illnesses. Women can safely use these stoves to cook corn tortillas for the family and simmer meat stew all day long without using very much wood or risking respiratory illness from excessive smoke. Cooking a meal for the family no longer has to be potentially life-threatening for rural Mexican women. Imagine how something as simple as a new stove can have so great an impact on a life and a community. It can be pretty easy to forget how easy we have it when we twist a knob and a pilot light flicks on a never-ending source of flames to cook up a feast. We are excited to say that since the fuel efficient stoves have been adopted into more and more homes families will continue to reduce their risk of lung diseases and provide a healthier community as a whole.