Written by Plant With Purpose on July 8, 2010 in General 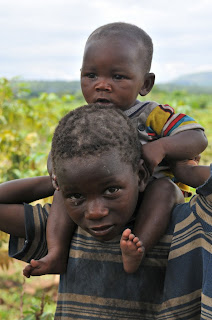 Last week, I had the opportunity to work at Summer Blast, my church’s mini K-6th summer camp. I am the leader of the 3rd and 4th grade group, the Blue Dolphins. I couldn’t be more excited about Summer Blast. I am all about singing songs, doing dance moves, playing games, and chasing after 8 kids with my clipboard and team sign in tow.

It was lucky that I was stoked to be part of Summer Blast because the Blue Dolphins are loud, excited, energetic, competitive, and talkative. It was imperative to them that I knew that dolphins aren’t actually blue, and that even though sharks could eat dolphins (5th and 6th graders are in the White Sharks group), we would be okay because “dolphins have bigger brains than sharks.” After a talking-to because of some unfortunate behavior during their games session, the Blue Dolphins remained loud and energetic, but proved that they could listen and follow directions while having fun. I had a great time talking to them about God, the Bible movies, books, and World Cup Soccer. Being present while children learn about God never ceases to amaze and inspire me.

A few months ago, another intern, Stephanie Rudeen, blogged about Burundi’s civil war and path to recovery. Burundi was plagued by 40 years of ethnic conflict between the Hutu and the Tutsi people that live there. Hundreds of thousands of people died and even after peace was achieved in 2006, thousands of refugees remain impoverished and homeless as they attempted to return to their homeland.

Although the conflict is over, the 2009 United Nations report on Children and Armed Conflict states that the Parti pour la libération du peuple Hutu-Forces nationales de libération (Palipehutu-FNL) continues to recruit children, even after it declared an end to hostilities with the government in 2008. Sexual violence against children is frequent in Burundi, and is even committed by members of the National Police, National Defense Forces, and FNL members.

Stories like this break my heart, but are unfortunately common. I think about children in countries such as Burundi and how they are no different than the Blue Dolphins. Those children deserve to be safe, play games, do crafts, and learn about God just like children here. I’m very glad that Plant With Purpose is working in Burundi. As refugees learn to farm their new land in sustainable ways, discover God’s love for them, and become empowered through Plant With Purpose’s work, Burundi will become a more stable and peaceful country. Burundi can become transformed into a nation that is safe for children through such operations.