Written by Plant With Purpose on March 25, 2010 in General 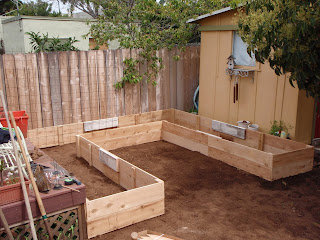 Last night I had the opportunity to celebrate the first birthday of an amazing local organization called ‘Victory Gardens San Diego’. Named after the ‘victory garden’ movement (promoted by the US government during the First and Second World Wars to free up needed domestic resources), their company overview on their Facebook page sums up the gist of what they do: 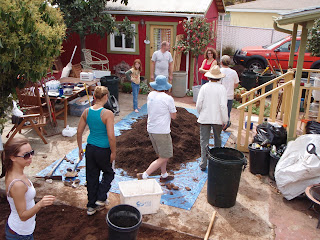 Celebrating at ‘The Linkery’, a very cool local restaurant, it was great to see some familiar faces from last Sunday. A group of us had volunteered to help VGSD do what it does best: install, often in just half a day, a garden in a yard or other such space where there previously was none. It is a great way to get involved locally with an activity similar to one that Plant With Purpose does abroad: promoting local food production in the form of small-scale, often backyard agriculture, and thereby helping to promote food security, community health and economic development.

As the bare patch of earth was transformed into a garden, the dozen or so of us had a great time working together, getting to know each other, and enjoying a sense of accomplishment for what we had done. Cedar fencing lumber became raised-bed gardening containers, soil and compost were blended to fill them, and drip irrigation was installed. Seedling vegetable starts were planted, and everyone left by mid-day a winner: we volunteers with the feeling of satisfaction for having worked hard to serve our neighbor, and the family with their dream of a garden fulfilled. I look forward to working with them again in the future, and invite you to check them out as well at http://home/boxcom/oldpwp.box.com.pa.victorygardenssandiego.com/index.html. 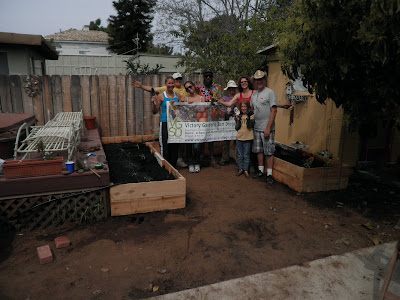 Colin Richard has volunteered many hours at Plant With Purpose over the last few years and has served as our Haiti Relief Intern since the earthquake on January 12. Recently Colin said, “Henry David Thoreau once wrote, ‘There are a thousand hacking at the branches of evil to one hacking at the root’. I’m proud to be part of organization that is “hacking at the roots” of poverty and not just the “branches”, holistically empowering the rural poor of the developing world to be agents of change in their communities.”