Voices from Haiti: Displaced But Not Despairing

Written by Plant With Purpose on April 28, 2010 in General 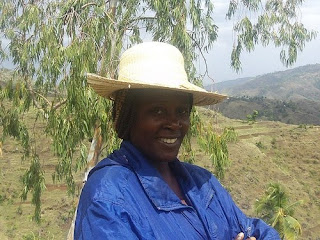 There are thousands upon thousands of examples of people who were displaced during the catastrophic earthquake that hit Haiti in January. Within this tangle of displaced and suffering people, it can sometimes feel hard to relate to or understand such suffering. But hearing the individual story of a woman who has experienced this devastation somehow makes this event more real, more heart wrenching, and is a stronger call for action.

Fontes Oldil (pictured above) is a graduate of the Plant With Purpose-sponsored agricultural vocational course that Plant With Purpose began in the late nineties. Before the earthquake hit, she was pursuing university-level studies in agronomy in Port au Prince at the Episcopal agricultural college. She was preparing her thesis on tomato production and was scheduled to graduate in March, with many opportunities beginning to open in front of her. But then the earthquake hit on January 12. Her school was destroyed and 21 of her classmates were killed. Even more were killed at an extension campus and many others are still in the hospital. Fontes was lucky, she lived through the quake, but she was still injured on her head and leg.

The day after the earthquake shook Haiti, Fontes decided to leave Port au Prince and walk back towards Grand Coline. Fontes didn’t walk alone though, she was with a group of about 12 friends, all students, heading to Bodin and Meyer to try and put the pieces of their lives back together again. Like many other displaced Haitians, that first night of walking she slept on the road in Gressier. She didn’t eat while walking, too devastated and shocked, but only drank small amounts of water and soda that were given to her. After a second day of walking she made it to Carrefour Dufort where she stayed in the home of Andrise, a friend from Cherident. On the third day she finally made it to Meyer where her family is from. Now she finally has a place to temporarily call home, be it with eight others at a friend’s house.

To help more Haitians recover from the devastating quake and bring hope to individuals like Fontes, Click Here.